Physical activities, exercises, and their effects to the immune system

Every system in the human body works together to maintain homeostasis. All these systems support and compensate each other in order to maintain an optimal condition within the human body. One of these systems is the immune system. During all of our activities, our body is constantly in contact with external agents which might be harmful to us. Examples include the entrance of any disease-causing microorganism into our body (virus, bacterias, parasites, etc), exposure to UV light from the sun, chemical poisons, physical or emotional stress, and so on.

Even though human body is constantly exposed to both external and internal agents, we do not experience diseases or disturbance on a daily basis. In fact, most of us will maintain a healthy condition and only a small portion will develop illness.(1) This is possible because the human body has a lot of systems which maintain homeostasis, one of which is defending against harmful external and internal agents.

The Physiology of the Immune System

Different types of liquids are also produced by the tissues around the mucous membrane, for instance: tears (contain lysozyme), saliva, gastric acid, and vaginal fluid. These liquids not only block the entrance of foreign substances, but also eliminate microbes and bacteria.(2,7) Pathogen and foreign substances that manage to escape the first barrier will be faced with the second barrier which is part of the innate immune system cellular component.

Macrophage, another type of phagocytic cells, works in a similar nature with neutrophils. Macrophage will directly identify, attach, form vesicles, and swallow the invading bacteria. Inside the macrophage, bacteria will be eliminated using the chemical properties of the macrophage. In addition to that, the chemical substances released by the macrophage during this process will increase blood flow to the site of infection. Increased blood flow will attract more leukocytes to the site of infection, hence contribute to the elimination of bacteria.

The human body is also equipped with adaptive/acquired immune system which has a memory that will recognize and remember many kinds of pathogens and form a specific immunity against them. Due to this ability, once another invasion of previous pathogens occur, the adaptive/acquired immune system will be able to respond better and eliminate the pathogen. It also has the ability to remember and adapt against previous pathogens, as well as preparing itself for the next attack.

First, IgM activates the complement cascade. Immunoglobulin that merges with other proteins―in this case complement proteins―will react better against antigens. Second, IgM will neutralize viruses by binding it so that it can not infect surrounding cells. On the other hand, IgG is an important and dominant immunoglobulin in our body. Binding between IgG and antigen, whether virus or bacteria, it will activate other cells of the immune system, such as macrophages, neutrophils, and NK cells.(9,10)

Much research shows that there are multiple factors which affect immune status. These factors will affect the risk of infections and diseases. One of these factors is physiological, like aging. Physiologically, immune system will decline once someone enters their 50th year of age.(12) Other factors include diet and nutrition. Much research about nutritional substances that boost the immune system are currently widely researched.(13)

Since ancient Greece, people has believed that exercise would boost someone’s health. The development of science about exercise was drastically seen during the 19th century, especially in various universities around Great Britain.

At that time, health was not the main goal of physical exercise. One beneficial property that was widely promoted was its effect on moral conformation―coherent with the saying “a sound mind in a sound body”. Even until now, exercise is becoming more and more important in the promotion of health, especially in industrial countries across the world.(15) Besides that, the correlation between regular exercise and mental health is making a comeback to the trend. This is marked by an increase in popularity of exercises like yoga.

Generally, physical activity is believed to have positive effects on the human body. This is also supported by various research. Physical activity is proven to influence the balance of energy and bodily composition. Physical activities and exercises are also currently being developed to ease post-operative complaints, as well as for patients in recovery periods or chronic depression.

In addition to that, physical activity is a modifiable factor and, more importantly, protective factor in cardiovascular diseases, stroke, hypertension, type 2 diabetes mellitus, osteoporosis, colon and breast cancer, and other chronic degenerative diseases. Hence, regular physical activity will reduce the risk of those diseases.(15-17)

The term ‘Physical activity’ is often being merged with ‘Exercises’, while in fact, these terms have different meaning. Physical activity is defined as any movement of the body, caused by the activity of skeletal muscle and causing an increase of energy consumption. Physical activity includes daily activity (such as: taking care of children or doing house chores), moving places (such as: walking or cycling somewhere), and leisure activities (such as: dancing or swimming).

This term also includes all forms of bodily movement in term of competitive sports, leisure sports, and daily activities.(6,16,18) In the other hand, ‘exercise’ is defined as structured, planned, and repetitive physical activities that aim to acquire or improve one or more components of fitness. Therefore, exercises can be viewed as a subcategory of physical activity. Nevertheless, both terms have a lot in common.

Physical activity that stimulates the cardiorespiratory system, musculoskeletal system, and metabolism will lead to more efficient performance and adaptation of the human body, hence improving fitness. Besides affecting the cardiorespiratory and other systems mentioned above, fitness also has more components, such as strength, flexibility, velocity, and optimal body fat.(6,16,19)

Exercises and physical activities are classified based on their frequency, duration, and intensity. Intensity measurement of physical activity is based on the amount of energy consumption during the activity which is measured in metabolic equivalents (METs=kcal/kg/minute).

In certain chronic diseases, the success rate of exercise prescription in reducing the risk or treating the disease is very dependent on the individual dosing of each case. This individual dosage is  mainly in the moderate intensity.(15-17) Exercise and physical activity is one of many factors that influence the immune system. However, its effect to the function of the immune system and the risk of infection is still an interesting and developing topic for researchers.

Correlation Between Physical Activity and Exercise with the Immune System 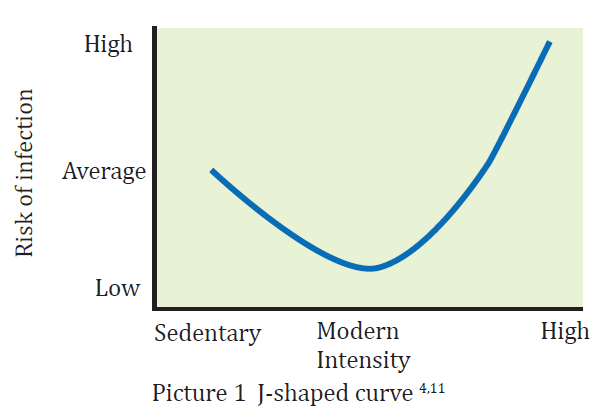 In addition to being affected by the intensity of physical activities and exercises, the reversed J-shaped curve also showed the influence of types and duration of the activities.(6,23) Various research supports the concept of the J-shaped curve. This research showed that people who perform regular moderate exercises have lower risk of developing upper respiratory tract infection or flu, compare to those with a sedentary lifestyle or who perform high intensity and over-duration exercises. 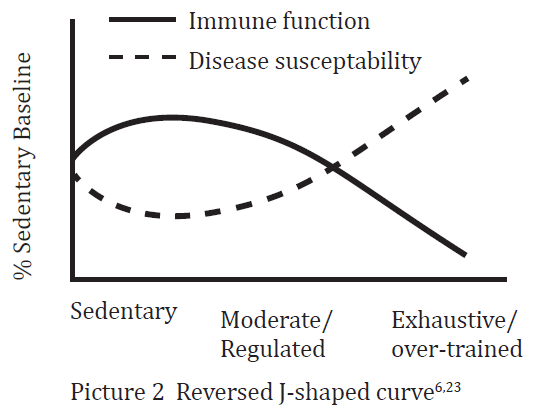 The first hypothesis proposed that moderate intensity exercises increase the amount of NK cells, neutrophils, and antibodies. Hence, it would improve the innate immune system acutely and gradually decreased back into its normal stage within 3 hours. Even though according to this theory exercises would only increase the innate immune system in a short period of time, it was thought to already give its protective effect and lower the risk of infections.(10,11,24)

People who are accustomed to a moderate intensity exercise routine will improve psychological conditions, lower emotional stress, improve nutritional status, and improve sleep habits. The positive effects of such sport will indirectly improve the immune system, also reducing the risk of infection.(11,14)

Nevertheless, these reports do not necessarily explain causality between the two. A few theories were proposed to try to explain its mechanism. High intensity or over-duration exercises is thought to suppress the immune system. This is caused by the decreased amount and activity of B lymphocytes, T lymphocytes, and NK cells. Besides that, high intensity exercises will decrease the activity of phagocytic neutrophils, decrease the concentration of IgA, and increase the concentration of pro- and anti-inflammatory cytokines. Therefore, the activity of the immune system will be altered. (4)

People who perform high intensity exercises will experience a condition called “open window” (Picture 3). Open Window is defined as a condition where the immune system will undergo a depression state after an exercise. This will allow virus and bacteria to invade the human body, hence the risk of infection will be higher. The biological mechanism related to this event is presumed to be connected to the release of the stress hormone cortisol.

A person who does high intensity exercise will have higher circulating cortisol levels. Cortisol is known to have an immunosuppressive effect. It will inhibit the function of cytokines and NK cells, as well as reducing the production of T lymphocytes and altering their function.(5,10) 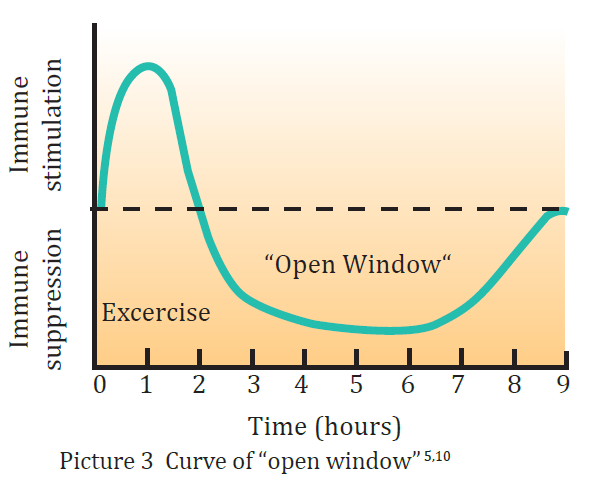 In addition to its relation to cortisol, suppression of the immune system in high intensity exercises is also presumed to be related to the nature of the exercises. High intensity exercises are thought to cause less sleep or rest duration, increase mental stress, increase exposure to pathogens, and inadequate nutritional intake. These conditions will impact the immune system negatively and increase the risk of infection.(11,14)

This article is distributed under the terms of the Creative Commons Attribution-NonCommercial 3.0 License (http://www.creativecommons.org/licenses/by-nc/3.0/)